It is my hope that other students will not have to go through what I went. Therefore, this article is regarding the education scenario in Badin district, which, no doubt, is in a pathetic state

I was born in the Badin district, in southern Pakistan. I completed my education till intermediate from there. I have now come to understand that all those years of getting educated were a waste of time, because I did not learn anything. The teachers in our classrooms were not properly qualified or trained. The school environment was based on bullying and not on learning.

The teachers had a few favourite students whom they used to motivate and focus on. Students like me only used to be beaten by the teachers. The education system was based only on rote learning. All the subjects were taught in Sindhi. We only had one English and Urdu subject till matriculation. Then, as I entered college we had all the courses in English. It was very hard to understand English, which made it that much harder to understand Chemistry, Physics and Biology. When I finally managed to learn English, two years had passed and I had already failed in my intermediate examinations. We had no recreational activities at high school or college. I used to go early in the morning and come back home at around 3 in the evening frustrated at not having learnt anything. The school environment and the overall system were not motivational or inspirational.

The early years of education for children are considered highly significant in building strong foundation; emotionally and academically. But my foundation was so feeble that it instead shaped loads of obstacles for me at getting admitted to a university. I attempted to get admitted at a number of universities in Pakistan, but failed to qualify its entry tests. I did not blame myself. Whatever was happening was because in my early days I was not provided with the education I needed or a flourishing environment where I could have thrived.

It is my hope that other students will not have to go through what I went. Therefore, this article is regarding the education scenario in Badin district, which, no doubt, is in a pathetic state. I would like to draw attention to the concerned authorities, policy makers, civil society, media, I/NGOs and parliamentarians of Badin’s decaying education system.

The first sight one encounters while entering Badin is it’s nasty government institutes. Then as one moves further inside the city they find broken roads with deep potholes, choked bubbling gutters, unplanned and poorly constructed drainage, electricity wires swinging over the heads of pedestrians, road-side encroachment, donkey-carts, rickshaws, and grimy buildings.

Badin lies in southern Pakistan near the Arabian Sea, some 200kilometres east of Karachi. Its population is about 1.5 million. Being a coastal belt, it is prone to natural disasters. It has experienced severe calamities in the last two decades. Heavy rains in 1993, a cyclone in 1999, floods in 2003, and then again in 2006 and 2010. Unprecedented torrential rains and floods have played havoc on Badin. Apart from this, socio-economic indicators reveal Badin is one of the most deprived and poorest districts in the country. 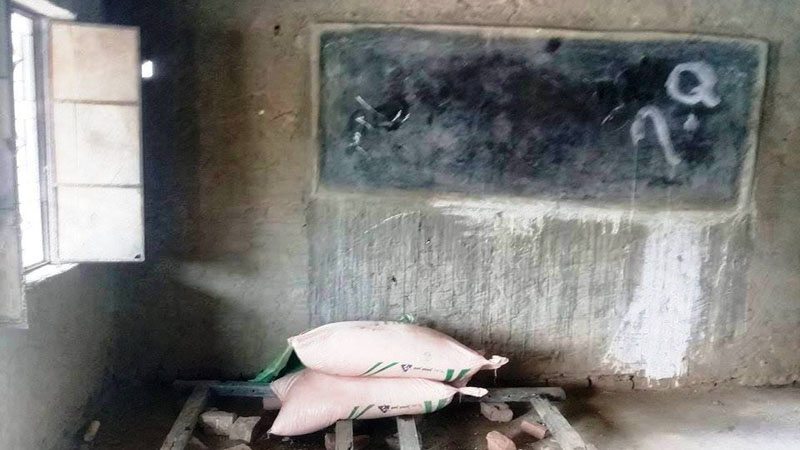 Education is a basic human right. Unfortunately Pakistan and particularly Sindh in particular are highly affected by the lack of education. According to reports by the Alif Ailaan Pakistan District Education Ranking (2016),Badin ranks at 104 out of 145 districts in terms of education. Sindh has 24 districts (now 29 districts) and out of them Badin stands at number 17.

Besides this, the number of children out of school is alarmingly high. According to reports, 56 percent of children aged 5 to 16 years are out of school. Of these 47 percent are boys and 66 percent are girls. While interacting with communities they said that “we are very poor, therefore instead of sending our children to school we send them to earn and work with us in farming and livestock rearing.”Poverty is the leading reason for children being away from school. It is surprising to know that 50 percent of children aged 5 to 16 have never seen a classroom.

Furthermore, the net enrolment proportion at the primary level is 39 percent, these drops to nine percent at middle school and seven percent at high school. Girls’ net enrolment rate at primary school is 32 percent and boys’ is 46 percent. In addition, 85 percent of students are enrolled in government schools whereas only15 percent in private schools. Regrettably, out of these only45 percent of girls and 47 percent of boys continue till fifth grade. 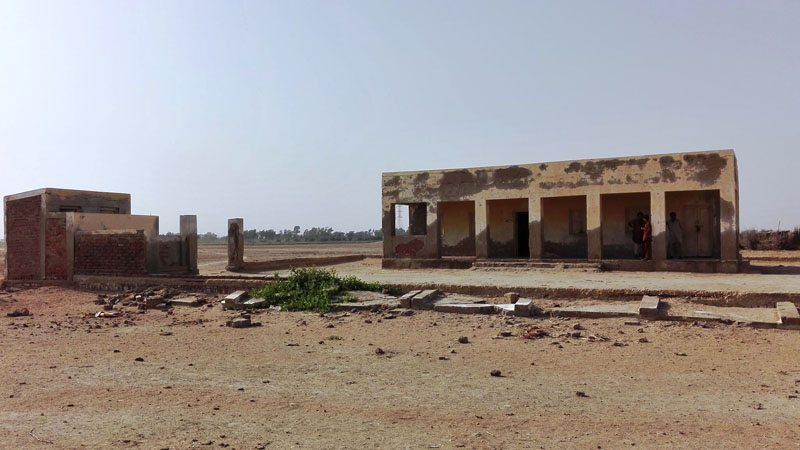 Apart from this, teachers’ availability in schools is a big problem. There are 6,074 teachers appointed in 3,052 government schools. About 67percent of primary schools have only one teacher. On average, at the primary level, 32 students are taught by one teacher. A lot of vacancies need to be filled in rural areas.

Education campaigner Mukesh Meghwar from Badin has said that “a lot of schools in Badin and Thatta are either closed or have no teacher.” He adds that, “after introducing the biometric system some improvement can be seen. Ghost teachers have started coming to schools regularly.” He further points out that “quality learning and teaching is still a distant dream for Badin’s students.”

The above described state of education is a big question mark on fifty years of PPP rule in the district. Badin has remained a PPP hub, but in the last ten years tenure, PPP has delivered nothing in the education sector. Hundreds of schools have been devastated. Teachers don’t bother to go to work. A fund of a million rupees is allotted by the district education department on education which goes into the pockets of PPP’s cronies. Only the PPP is promoted in the district and its cronies have permeated all sectors, including education. The PPP’s will to make education better is a big lie. One may visit and bear witness to how pathetic the education system is in Badin. Moreover, an ‘education emergency’ was once declared by the Sindh government. But this emergency status is nothing but hot air.

The status of Badin’s education system reflects poor management, lack of politicians will, improper planning and budgeting at federal, provincial and district-levels. Apart from this, the implementation process is also full of loopholes. Rampant corruption in education department breeds such situations. The government needs to pay heed to education and remove all hurdles which deprive the children of Badin and Pakistan of a proper education.