This time a year ago, the mass exodus of refugees began from Myanmar to Cox’s Bazar in Bangladesh. But one year on and only a quarter of the funds requested by 11 partners to cover their education needs have been provided: US$11.7 million of $47.3 million.

This is despite the requirements for education being modest relative to those for other sectors. US$240 million is requested for food security, US$113 million for health, and US$137 million for water, sanitation and hygiene. 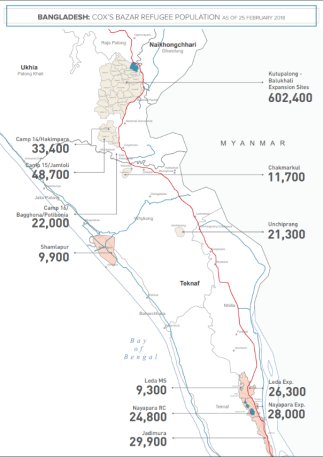 In total, nearly 1 million refugees from Myanmar are currently sheltering in Bangladesh. Education for these families is critical. Half of the refugees are children and youth between 3-24 years yet they are not allowed to pursue formal education in Bangladesh. It is estimated that 5,000 equipped classrooms are needed to meet these children’s needs.

Only informal education is available through temporary learning centres provided by Save the Children, UNICEF and local Bangladeshi organisations, including BRAC, and in religious schools or ‘maktabs’ which offer Arabic language and Quranic education. Their work is notable. By July, for instance, UNICEF were operating some 1,200 learning centres which were catering to 140,000 children.

But the challenge is large.

For primary aged children, 57% of girls and 60% of boys have attended learning centres since arriving in Bangladesh. These rates fall even further to 43% of both boys and girls under the age of five. Only 4% of adolescent girls aged 15-18 are attending, compared to 14% of adolescent boys.

As described by UN Office for the Coordination of Humanitarian Affairs in its brief on the refugee crisis, there are eleven partners working on education in the response have a two-phased approach to the task. First and foremost, the plan is to expand equitable access to learning, providing psychosocial support in coordination with those working on child protection. The second phase will aim to improve the quality of education by developing appropriate teaching and learning strategies, and working with education authorities to clarify problems and find new solutions.

For these partners, a multi-sectoral approach is important, where girls are at risk of child marriage and trafficking, where safe spaces are paramount, and where menstrual hygiene and other health interventions can be interwoven with the provision of education.

But, as we will be building upon in the 2019 GEM Report on migration and displacement due out November 20th, the most important move for these children would be to include them in the Bangladeshi national education system, rather than setting up something in parallel, a point that is constantly emphasized by the UN Refugee Agency, UNHCR. However, whatever education these children receive, it must be relevant and culturally appropriate.

Saifula (8) attends classes to help him through the trauma of attacks in Myanmar. He attends classes in a learning center run by the Bangladeshi aid organisation, BRAC, in cooperation with Plan International. Here children learn how to cope with the horrible impressions from the attacks last year and the new life in the overcrowded refugee camps. “When dogs bark at night he thinks the army is coming”, says his mother Janoara. “The children gets upset when they hear Bangladeshi locals celebrate with fireworks. It sounds just like when the Rakines came and attacked. If they are afraid I hold them close.” Photo: Ingebjørg Kårstad/Norwegian Refugee Council.

And time is of the essence. Even putting aside the fact that it is monsoon season, with flooding and landslides, bringing with them increased risk of disease, and heightened tensions in camps, a global ambition outlined in the New York Declaration for Migrants and Refugeesfrom September 2016 was that all refugees should receive education within a few months of arrival.

This target has long been missed. And it will continue to do so until humanitarian aid to education is increased. Currently only 3.8% of the aid for the Rohingya crisis has gone to education, an increase on the global average of just over 2%, but only slightly, and by no means sufficient.