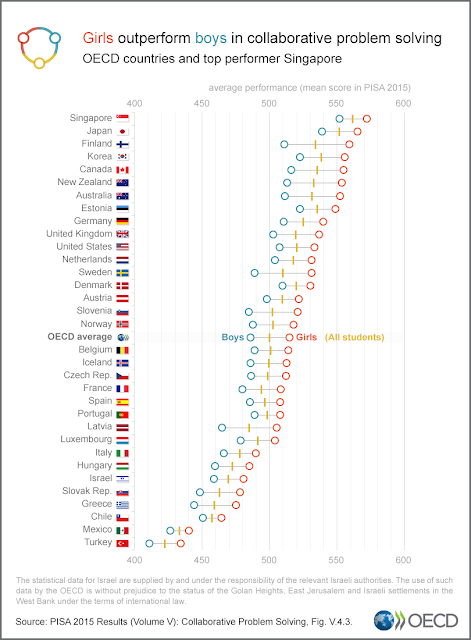 Successes and failures in the classroom will increasingly shape the fortunes of countries.  And yet, more of the same education will only produce more of the same strengths and weaknesses. Today’s students are growing up into a world hyperconnected by digitalisation; tomorrow, they’ll be working in a labour market that is already being hollowed-out by automation. For those with the right knowledge and skills, these changes are liberating and exciting. But for those who are insufficiently prepared, they can mean a future of vulnerable and insecure work, and a life lived on the margins.

In today’s schools, students typically learn individually, and at the end of the school year, we certify their individual achievements. But the more interdependent the world becomes, the more it needs great collaborators and orchestrators. Innovation is now rarely the product of individuals working in isolation; instead, it is an outcome of how we mobilise, share and integrate knowledge. These days, schools also need to become better at preparing students to live and work in a world in which most people will need to collaborate with people from different cultures, and appreciate a range of ideas and perspectives; a world in which people need to trust and collaborate with others despite those differences, often bridging space and time through technology; and a world in which individual lives will be affected by issues that transcend national boundaries.

As one would expect, students who have stronger science, reading or mathematics skills also tend to be better at collaborative problem solving, because managing and interpreting information and complex reasoning are always required to solve problems. The same holds across countries: top-performing countries in PISA, like Japan, Korea and Singapore in Asia, Estonia and Finland in Europe, and Canada in North America, also come out on top in the PISA assessment of collaborative problem solving.

But individual cognitive skills explain less than two-thirds of the variation in student performance on the PISA collaborative problem-solving scale, and a roughly similar share of the performance differences among countries on this measure is explained by the relative standing of countries on the 2012 PISA assessment of individual, creative problem-solving skills. There are countries where students do much better in collaborative problem solving than what one would predict from their performance in the PISA science, reading and mathematics assessments. For example, Japanese students do very well in those subjects, but they do even better in collaborative problem solving. By contrast, students in the four Chinese provinces that took part in PISA did well in mathematics and science, but came out just average in collaborative problem solving. In a nutshell, while the absence of science, mathematics and reading skills does not imply the presence of social and emotional skills, social skills are not an automatic by-product of the development of academic skills either.

All countries need to make headway in reducing gender disparities. When PISA assessed individual problem-solving skills in 2012, boys scored higher in most countries. By contrast, in the 2015 assessment of collaborative problem solving, girls outperformed boys in every country, both before and after considering their performance in science, reading and mathematics. The relative size of the gender gap in collaborative problem-solving performance is even larger than it is in reading.

There also seem to be factors in the classroom environment that relate to those attitudes. PISA asked students how often they engage in communication-intensive activities, such as explaining their ideas in science class; spending time in the laboratory doing practical experiments; arguing about science questions; and taking part in class debates about investigations. The results show a clear relationship between these activities and positive attitudes towards collaboration. On average, the valuing of relationships and teamwork is more prevalent among students who reported that they participate in these activities more often. For example, even after considering gender, and students’ and schools’ socio-economic profile, in 46 of the 56 education systems that participated in the assessment, students who reported that they explain their ideas in most or all science lessons were more likely to agree that they are “a good listener”; and in 37 of these 56 systems these students also agreed that they “enjoy considering different perspectives”. So there is much that teachers can do to facilitate a climate that is conducive to collaboration.

It is interesting that disadvantaged students see the value of teamwork often more clearly than their advantaged peers. They tend to report more often that teamwork improves their own efficiency, that they prefer working as part of a team to working alone, and that they think teams make better decisions than individuals. Schools that succeed in building on those attitudes by designing collaborative learning environments might be able to engage disadvantaged students in new ways.

The inter-relationships between social background, attitudes towards collaboration and performance in collaborative problem solving are even more interesting. The data show that exposure to diversity in the classroom tends to be associated with better collaboration skills.

Finally, education does not end at the school gate when it comes to helping students develop their social skills. It is striking that only a quarter of the performance variation in collaborative problem-solving skills lies between schools, much less than is the case in the academic disciplines. For a start, parents need to play their part. For example, students score much higher in the collaborative problem-solving assessment when they reported that they had talked to their parents outside of school on the day prior to the PISA test, and also when their parents agreed that they are interested in their child’s school activities or encourage them to be confident.

PISA also asked students what kinds of activities they pursue both before and after school. Some of these activities – using the Internet/chat/social networks; playing video games; meeting friends or talking to friends on the phone; and working in the household or taking care of family members – might have a social, or perhaps antisocial, component to them. The results show that students who play video games score much lower, on average, than students who do not play video games, and that gap remains significant even after considering social and economic factors as well as performance in science, reading and mathematics. At the same time, accessing the Internet, chatting or social networking tends to be associated with better collaborative problem-solving performance, on average across OECD countries, all other things being equal.

In sum, in a world that places a growing premium on social skills, a lot more needs to be done to foster those skills far more systematically across the school curriculum. Strong academic skills will not automatically also lead to strong social skills. Part of the answer might lie in giving students more ownership over the time, place, path, pace and interactions of their learning. Another part of the answer can lie in fostering more positive relationships at school and designing learning environments that benefit students’ collaborative problem-solving skills and their attitudes towards collaboration. Schools can identify those students who are socially isolated, organise social activities to foster constructive relationships and school attachment, provide teacher training on classroom management, and adopt a whole-of-school approach to prevent and address bullying. But part of the answer lies with parents and society at large. It takes collaboration across a community to develop better skills for better lives.

How To Prevent Violent Extremism Through Education: This UNESCO Research Institute Might Have An Answer

How To Prevent Violent Extremism Through Education: This UNESCO Research Institute...