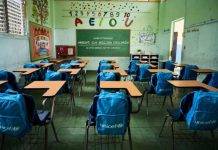 It is time to return to learning

114 million children still out of the classroom in Latin America...

It is time to return to learning

Education through WhatsApp: Keeping girls learning and safe during lockdown in...