Using game-like smartphone apps is one way to give children incentives for learning.   © NurPhoto/Getty Images

“There are investments that I’ve made where you think: ‘What social good did that do?’ We have a company called Escapex. It lets celebrities reach out to the fans directly. This might not be a big social impact company, but previously the fan in some village somewhere sees this superstar as a very detached person. Now they can tweet a message and the star can see it and even respond. You’re democratizing access to celebrities. Is that a good thing? I don’t know. But you’re giving people choice.”

Over the years, a lot of people have given money to Ong. In the mid-1990s, he co-founded the internet dating pioneer Match.com, before starting Interwoven, an internet technology company that listed on Nasdaq and was eventually sold for $775 million in 2009 to the technology multinational Autonomy. Encentuate, another of his technology startups, was bought by IBM for an undisclosed fee.

Since then, he has reinvented himself as a venture capitalist, first in China, where with GSR Ventures, a Chinese venture capital firm, he was an early funder of the country’s online gaming boom, backing companies such as FunPlus, which was sold to Zhongji Holding for nearly $1 billion in 2014. That year, he came back to Singapore to establish Monk’s Hill Ventures, which invests in technology companies in Southeast Asia.

Ong echoed a common Silicon Valley credo — that investing in creative startups generates social value — saying that “my strong belief has always been that entrepreneurs can change the world.” However, since 2015 he has been looking at ways to apply the technologies that have underpinned his commercial successes for purely social good. 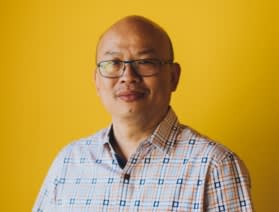 In 2014, Ong was invited to speak at a summit in Cape Verde which brought together startups and innovators from around Africa. His pitch was that the continent “could bypass the industrial phase of its economic development and go straight to the knowledge economy.” The response from delegates was that the idea was not feasible without wholesale changes to the education system, which is moribund in much of the developing world. According to UNESCO, more than 250 million children around the world do not go to school.

“I left the summit very confused, thinking: ‘I guess this is not a solvable problem,'” he said. “So I did a lot of research into what [nongovernmental organizations] are doing. And I realized, none of them were actually trying to figure out how to solve this problem at scale. They could solve it for 10,000 [or] 50,000 kids … . But the systems they were using won’t get to even 1 million, let alone 100 million kids,” he said.

Ong decided that the problem needed a radical, disruptive approach. “In tech we solve problems for hundreds of millions of users,” he said. “We asked the question that most pedagogues think is not possible: Can you teach without human teachers? Can you teach without schools? We started asking those blasphemous questions… We took people from the gaming industry, from the social media industry and pedagogues, and we started experimenting with a solution.”

That solution, Solve Education, is now being trialed across Southeast Asia. The smartphone-based system uses educational games, social challenges and “in-game” incentives to teach children, using lessons learned from social gaming. “[In social games] you actually learn a lot of stuff, but those things aren’t very useful outside the games,” Ong said. “So how do you create a game world where you learn a lot of stuff, but what you learn is actually useful outside the game?”

Ong’s approach is typical of an emerging style of philanthropy that is gradually taking root in Asia as the region’s technology boom produces a new generation of wealthy individuals. In the U.S., Microsoft founder Bill Gates’ eponymous foundation has been credited with pushing charity away from a focus on how much money is spent toward a more scientific approach that looks to solve problems and measure impact.

“There’s a whole new breed of entrepreneurs who’ve made their money through tech. And if you really want to look at social enterprise tech is the fastest way to scale,” said Naina Subberwal Batra, CEO of the Asian Venture Philanthropy Network, which links wealthy individuals and family offices with philanthropic projects and social ventures. “It’s very different from an earlier generation of philanthropists who say: ‘Let’s build schools; let’s put our name on buildings.’ Here you’re using technology to actually get huge scale, and looking at multiplying impact.”

Most AVPN members invest in education, in part for cultural reasons — Confucian values drive a lot of the models of charitable giving in Asia, particularly in Chinese families. However, there is also a simplicity to it, Batra said. “It’s the easiest to understand. If you look at climate change, climate change in this region is huge, but you don’t really see the benefits [of investing] straight up. In education, it’s much easier to say: ‘I’m making this kind of impact.'”

Solve Education’s approach could be controversial, and not just because of its teacher-less model. Ong has a vision of making the initiative self-funding by monetizing the pool of talent that it hopes to create. If it can reach 100 million people and give them basic vocational skills, it will be able to then pay them to perform some tasks using a crowd-working approach.

“Assuming we’re successful, this would be eminently very fundable,” Ong said. “If you can create a pool of millions of workers, then you just take a small percentage. There are a lot of revenues to be made.” That, he is quick to note, is not the goal.

The Silicon Valley approach to philanthropy does have critics, who say that it often leans too heavily on the idea that technology can solve any problem. Some of its proponents have been accused of arrogantly assuming that they have simple quick fixes to complex and enduring issues.

But Ong said that he came to the problem of education without any preconceptions about what the solution would be. “I didn’t assume it would be a tech solution,” he said. Instead, he approached it like an engineer. “We cannot assume it is not solvable, so what does the solution look like? I don’t think we’ve achieved it yet, but my belief is that we need to try. If it’s doable then you shift the world.”

Singapore: Trans-ASEAN education can play a role in building a regional...